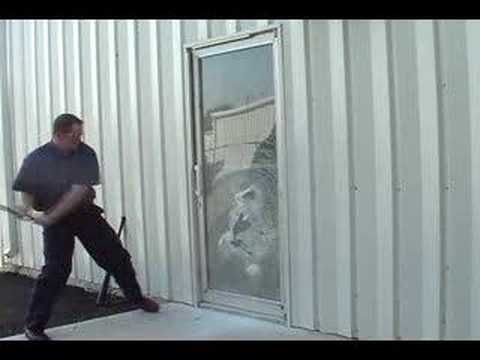 Security window film is a thick, clear layer of window film that is applied to the inside or outside of current windows to increase the structural integrity of those windows. Functionally, security film works by holding the glass together even after it is broken. By doing this, potential intruders are forced to pierce the film or break out the entire pane to gain entry. Working as a deterrent, security film is effective in slowing down or challenging would-be intruders.

Home security window film adheres glass together preventing glass shards from flying through the air when force is applied to the protected window. With greater thickness, it creates a safer environment during: intrusions, natural disasters, bomb blasts, & accidental damage.

The September 11th terrorist attack revealed vulnerability and the need for safety in Government & commercial buildings. After this horrific attack, Congress spent $5 billion on the installation of security window film in the U.S. Capitol, the Supreme Court, and the White House. In events like the Oklahoma City Bombing, window film could have saved lives by reducing the amount of flying glass shards.

What does it mean for me?

OUR SATISFIED CLIENTS SAY IT ALL

Check out the testimonials from our happy customers below

All the team members of SunGlo not only give you the greatest of service but they will work with you and provide a fair price. I got full window tinting service from this professionals of Fort Collins. There I got huge discount on tinting, it was really nice experience for me.

SunGlo came in a fixed my attempts at DYI for window coverings. Quick and professional. Window looks wonderful and we no longer feel the need to watch the neighbors TV at supper time. Much appreciated and highly recommended.

Get a Free Estimate